The Galvin Center at Motorola Solutions’ former headquarters in Schaumburg, home to a museum of the telecommunications giant’s history and a place where many of the company’s groundbreaking engineers perfected their trade, is meeting the wrecking ball.

The two-story building’s demolition is a significant step in Chicago-based UrbanStreet Group’s plans to redevelop the 225-acre campus into a mix of stores, multifamily residences, restaurants and more. Construction of a new central road through the campus also is underway, and by next summer about 1.8 million square feet of buildings will have been razed.

Bob Burk, managing partner of the development firm, said he can feel the weight and significance of starting with the Galvin Center, which Motorola used as a training center for employees and as the place where employees would interact with clients.

“Where we’re standing, literally, is going to be the Topgolf site,” he said while watching the demolition from a safe distance Tuesday.

The only other approved project on the site so far is a 260-unit apartment building farther north, along Algonquin Road. But in years to come, UrbanStreet Group’s plan is to turn the campus into what it calls the Veridian community of stores, restaurants, offices, multifamily residences, entertainment venues and park space.

Though unlikely to become formal proposals to the village until next year, some of the developer’s plans include a senior living facility, row houses and potential corporate and health care buildings.

Doing all this on a site already made famous by Motorola has both positive and negative aspects, Burk said. Among the negative is the intensive demolition, as well as the seven months of preparation and cleanup that preceded it.

On the other hand, Motorola demonstrated the land’s prime location and potential, he said.

“If this was just a field, no one would have a perspective on what this is and what it can be,” Burk said.

Though the ambitious redevelopment wouldn’t work for every former corporate campus, the size and location of the site at the southwest corner of Meacham and Algonquin roads is ideal, Burk said. Motorola first acquired the land in 1964 and made its headquarters there a decade later.

“There shouldn’t be fear in evolution,” Burk said. “It should be embraced.”

Although Motorola Solutions moved its headquarters to Chicago in 2016, about 1,600 employees remain in a few buildings on the site. Zurich North America built its new 783,800-square-foot headquarters next door along the Jane Addams Memorial Tollway.

The only former Motorola buildings not planned for demolition are a six-story office building in the center of the site, the former credit union building on Algonquin Road and a small welcome center. UrbanStreet plans to repurpose those as part of the redevelopment. 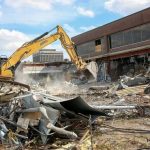 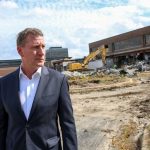 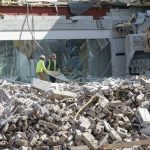 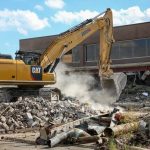 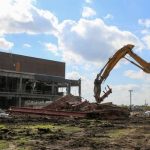