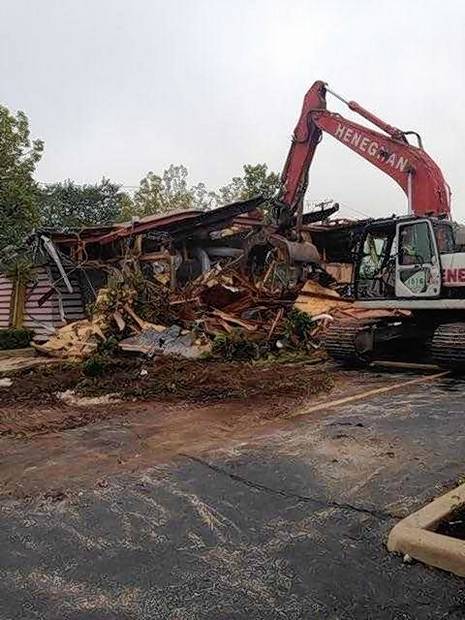 The last reminder of where Ray Kroc opened his first franchised McDonald’s in Des Plaines went into the history books Tuesday, when the 33-year-old replica restaurant building met the wrecking ball.

The one-story concrete block building at 400 Lee St. already had the tops of its golden arches and main “McDonald’s” sign stripped from it in January. At the same time, the company had the 63-year-old original neon road sign dismantled, so it could be restored and preserved off-site.

After months of delays, demolition crews returned Monday to set up fencing, and first thing Tuesday morning, began the teardown. Workers from Heneghan Wrecking Co. remained there through the afternoon cleaning up debris to be hauled away.

Eventually, McDonald’s plans to plant grass and donate the land to the city. City officials don’t have immediate plans for the site, though they’ve suggested installing a historical marker.

The fast food giant announced late last year it planned to demolish the replica building — which at one time served as a museum of company history — because of its location in an oft-flooded area and the difficulty of maintaining it.